FIFA World Cup 2018 is ready to take off in Russia and all the participating teams are entering into final phase preparations before jumping into this mega event of football. The defending champions of FIFA World Cup Germany have also ensured their participation in this event and recently the team management have also displayed their new team Kits and Jerseys for World Cup 2018.

The defending Champions Germany have unveiled their new Kits and Jerseys for the FIFA World Cup 2018 and Addidas are the official manufacturers of this beautiful uniform. The new kit of Germany football team matches with their historical uniform of 19’s.

Two color combinations is used in the new kits of Germany football team as the shirts of the team are white and shorts are made by black color. The design of shirts is quite unique and stylish which succeed to attract the fans of the team.

The number is present on the center of the back of the shirt whereas the shorts are plan black with the logo of their official manufacturers on the left side. The addidas have also launched the complete tracksuit along with the uniform of Germany football team. 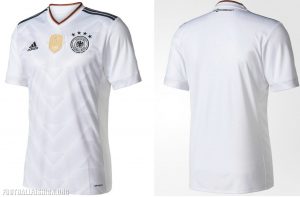