Another bad news coming in for Pakistan Cricket team fans as Pakistan’s most reliable pace bowler Muhammad Amir is suffering from Chicken Pox. As per sources, the participation of Muhammad Amir in 3rd ODI Match is still suspicious and he might be ruled out of 3rd ODI match against England scheduled to be played on 14th May 2019.

According to some media sources, the Initial Medical Examination of Muhammad Amir shows positive signs of Chicken Pox but still his complete medical report is yet to be revealed. In medical science, Chicken Pox is disease which occurred due to infectious virus known as Zoster Virus and it might cause high fever as well as red pimples on different parts of the body. 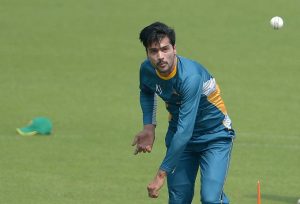 Muhammad Amir who has also failed to impressive selectors for his selection in 15-Member Pakistan’s World Cup 2019 squad. No doubt after ICC Champions Trophy Muhammad Amir remained out of form and he was only added against England ODI series to provide him another chance to re-gain his form before the start of World Cup 2019. However, before appearing against England, Muhammad Amir has been suspected to Chicken Pox and hopefully he will remain out throughout this series.

The ICC Champions Trophy Finals hero Muhammad Amir is considered as the main stream pace bowler for Pakistan and no doubt Amir has played vital role in the victory of his team during crucial situation and his presence is real threat for all other cricketing sides.

The mega cricket event ICC Cricket World Cup 2019 will start from 30th May 2019 and ran until 14th July 2019 at different playing venues of England & Wales. Pakistan will appear in this tournament under the captaincy of experienced Sarfraz Ahmad whereas Shoaib Malik will perform his duties as Deputy of this side.