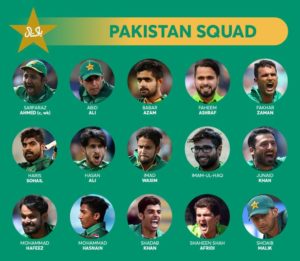 In spotlight Pakistan picks up same playing squad for World Cup 2019 that also appeared in recent ODI series. ICC Champions Trophy hero Fakhar Zaman along with Iman-ul-Haq will serve this team as reliable opening pair whereas Pakistan middle order batting line-up is equipped with best and most experienced ODI players.

Pakistan former skipper Shoaib Malik along with Muhammad Hafeez, Haris Sohail and Baber Azam are main stream middle order batsmen of this team whereas the skipper Sarfraz Ahmad will contribute on both sides of the wicket as a batsmen as well as wicket keeper.

Unfortunately ICC Champions Trophy Finals hero pace bowler Muhammad Amir has failed to impressive the selectors for ICC Cricket World Cup 2019 and no doubt he was running out of form during recent few months. However, Muhammad Amir will travel with Pakistan to England and appear in ODI series against host side before leaving the team for World Cup 2019.