Pakistan Cricket Broad has decided to drop Junaid Khan from Pakistan Team Squad for ICC Cricket World Cup 2019 and after this news Junaid has twitted his picture in protest of this decision and Twitter Users have also reacted with anger over this decision made by PCB. 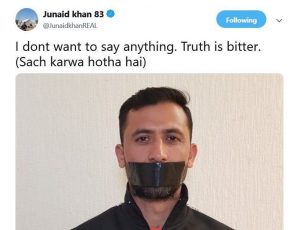 Junaid Khan was the part of Pakistan 15-member Team Squad for World Cup 2019 but afrer observing his recent performance in ODI series against England, PCB has decided to drop him and Wahab Raiz will fulfill his vacant place as main stream pace bowler for Pakistan during World Cup 2019.

After this decision, Junaid Khan has posted his picture with description “Truth is Bitter”. Twitter Users also showed off their aggressive reactions after this decision and mostly users argues that the decision made by PCB is totally bad and Pakistan cricket team will suffer some serious outcomes in the absence of Junaid Khan.

Pakistan has recently ended up their tour against England and the host side England smashed them with 4-0 series white wash. Apart from batting performance, Pakistan pace bowlers looked completely clueless in front of strong English batting order.

The current form of Pakistan pace bowlers raise some serious issues regarding to their preparations for the upcoming mega event ICC Cricket World Cup 2019. But PCB hopes that things will turn into their favor during World Cup 2019.